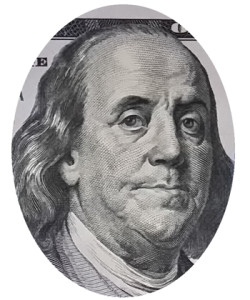 It was a wonderful snowey day before Christmas and my girl friend wanted me to go to the bank and get three, fresh, new one hundred dollar bills. She was going to give her nieces and nephew the bills as gifts. So off I went to the bank.

Upon return, I took a look at the bills and they were brand new. And, I had a brand new Samsung Galaxy Note 3 cell phone. The bills were so beautiful, I took a picture of them. I take pictures of almost anything, cause I´m a graphics geek. You never know when a picture might come in handy in my land of Geekdom. 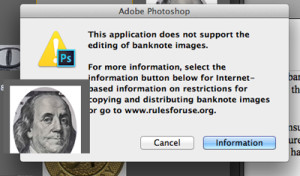 Anyway, I transferred the images over to Mr. Mac the hard drive, then I opened Adobe CC Bridge, found the bills image and tried to open it. A new warning message that I had never, ever, ever seen before popped up. You can see it on the left. I took a screen shot.

I freaked out. I started looking through my windows to see if the Adobe CC Money Police where outside watching me.

I heard strange noise on my phone. I wondered if because I tried to open the image in Adobe Bridge CC, did The Adobe CC Money Police automatically tap my Magic Jack line.

So, what I ended up doing was opening the image in a 9 year old version of Fireworks. MacroMedia had no problem with me opening a picture of a one hundred dollar bill.

Just for fun, I took pictures of USA Pennies. I could open those images. Then I tried Dimes. That worked too. I guess Adobe is starting with the Big Money and working down.