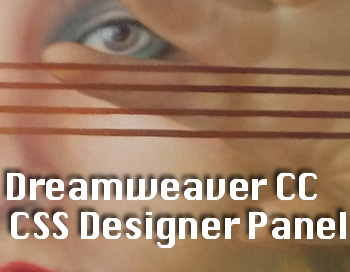 The Adobe Dreamweaver CC Designer Panel is a crucial, major change compared to previous versions of Dreamweaver. The CSS Styles panel in Dreamweaver didn´t change (hardly) in about 10 years.

I write my own CSS but I used the CSS Styles Panel in previous versions of Dreamweaver for many different things because it was quick and handy.

In the new Dreamweaver CSS Styles Panel, now called the Adobe Dreamweaver CC CSS Designer Panel, things that were important to me moved and were no longer easy to find let alone implement the things that I would do to get things done.

What I used a lot in the old CSS styles panel was the Margin and Padding controls. I thought it was handy to add padding and see the effect live in the design panel. That function always reminded me to subtract width or height from the box I was adding padding to. I found the same to be true of the Margin Controls.

Something that I couldn´t find that I used all of the time was the “add an existing style sheet option.” That used to be a click, click thing, and that moved. It´s easy to find now if you know where it is, but the move really messed with my mind for a while.

Also, I used to like the background options for browsing for images of backgrounds, or applying color backgrounds. That whole thing is kind of different now.

Now let me say, I do write most of my code, but I do enjoy a little lazy click, click from time to time if I know what is where.

So here it is. This is a lot more simple to explain when you have someone with you that just happens to be an One on One, Live, Dreamweaver Teacher. Hey, that´s me. Drop me a line or give me a call for a One on One, Private Session.