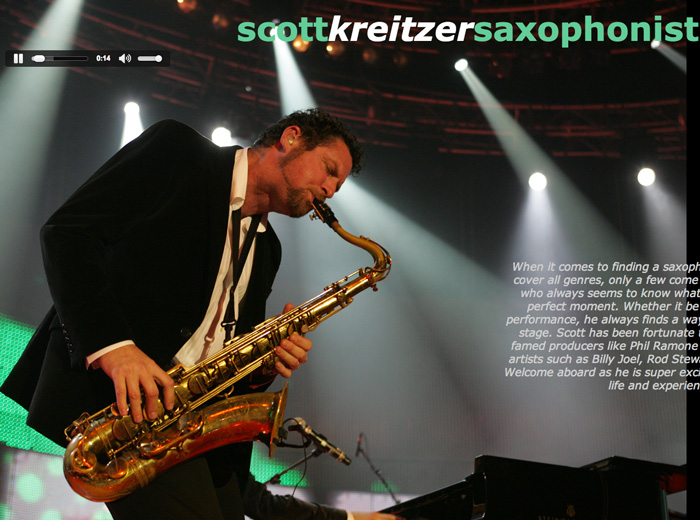 This is my client, Scott Kreitzer, NYC Saxophonist. He has played with Billy Joel, Rod Stewart, Phil Ramone, Peter Cincotti and many others.

He just wanted to build a little web site about himself and his music. Almost like an electronic business card.

He had an idea of the images and information he wanted to put out there for himself and for others to see and hear, we set up a day and time to put something together.

Scott is pretty busy doing Broadway shows and his own concerts, he didn´t have the time to learn CSS and all of html as well as he knows how to play his sax and flute. So showed me an image layout of what he had in mind.

The first thing that came to me was, “Tables.” Yeap, I said it, “Freakin’ Tables.” I told him up front. I said Scott, this code is not going to be the latest MIT discovery, but you´ll be in control and it will give you want you are looking for.

The next day, after Scott had finished another Broadway Show, he reviewed our notes, and reviewed the videos from my site about tables that I had suggested he look over.

In our session, he mentioned that he wanted his music to auto-play. The great thing is that we just used the new html5 audio tag and that worked like a charm.

So, check out Scotts site. Have your sound on your device ready to go.

Click here and be ready for some great sound.

We didn´t make the site responsive yet, but one thing at a time.