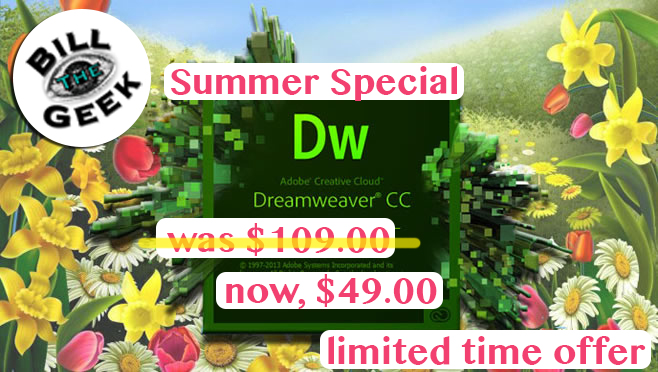 Of course, I´ve been working on the “Adobe Dreamweaver CC Video Tutorial Series” since December of 2013. I finally put the series up at Udemy.com 2 weeks ago. Thank you for the 200 people that signed up and tested the series for free.

Thank you very much for the more than 1,000 people that purchased the series at full price.

In thanks to the people all over the world that have downloaded the life time series, I am offering a $60 discount so that for this Summer only, you can have access to all of the videos and life time updates for a total of $49.00. That´s a bargain, enjoy.

This series is different because I don´t work for Adobe. I use Dreamweaver to build sites every day. I teach clients, small business owners how to build, edit, upload and create Responsive pages for mobile devises and tablets so that their pages show up number one on Google.

This series is about ALL THINGS WEB!