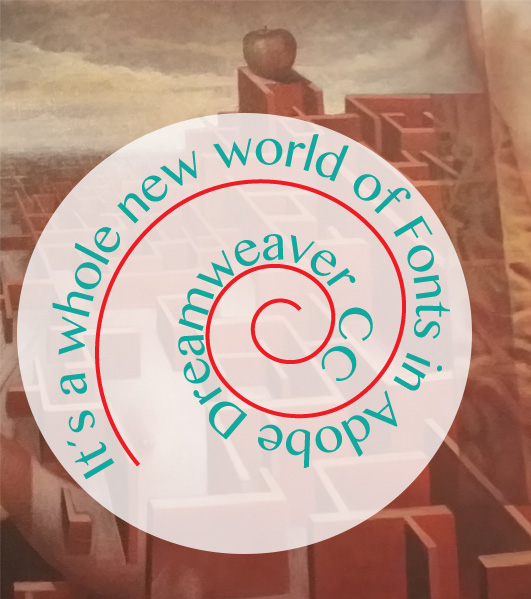 It´s a brand new world of fonts when it comes to using fonts in Adobe Dreamweaver CC.

I´ve been using Dreamweaver since the year 2000. Forever, you would go to the properties panel and choose the font you wanted to apple to whatever. When choosing fonts back then, they would have a list of what they called, “Font Stacks.” They would look like this,,,,,,, Arial, Helvetica, San Serif… Something like that.

I would have to explain to my clients why those options existed, why in that order, and then of course the big apparent question which was, “Why can´t I use whatever Font I want to use.

Well, glad you ended up here at the land of Bill the Geek so I can fill you in. In the old days before we had cars and telephones, people that only had computers only had certain fonts pre installed from Mac land or Bill Gates land. The most common fonts, I mean the really, really, really most common fonts where listed in these Font Stacks by Adobe (or their previous owner, MacroMedia).

So, that´s why you couldn´t throw up any old font on a web site, because no one would see any text if they user didn´t have it on their computer (not really true. I put up a strange, fun font on my site back in 1997. It showed up as Wing-Ding in some school districts. For those of you that don´t know Wing-ding, let´s just say that it was not a good situation).

So here´s the story, I´m using Adobe Dreamweaver CC for the first time. I´m getting around, things are good. I finish a responsive site, I have all of my images in and ready to go, the SEO parts of the page are fine, then, I decide to do the easiest part last. That would be using the fonts in Adobe Dreamweaver CC.

To see how the story turns out, watch the video.